This year the weather has been something of a mystery for the State of Utah this year.  Where we are supposed to be getting snow, it's nothing but sunshine.  Now for me, a guy who likes the sunshine over being frozen, this generally isn't an issue, but I also like to drink water and play on water during the summer, so the lack of snow pack in the South Eastern portion of Utah is a little unsettling.  Well, I can't do anything about it other than fret, so what do I do with unseasonable warm temps.... Plan a Canyon trip. 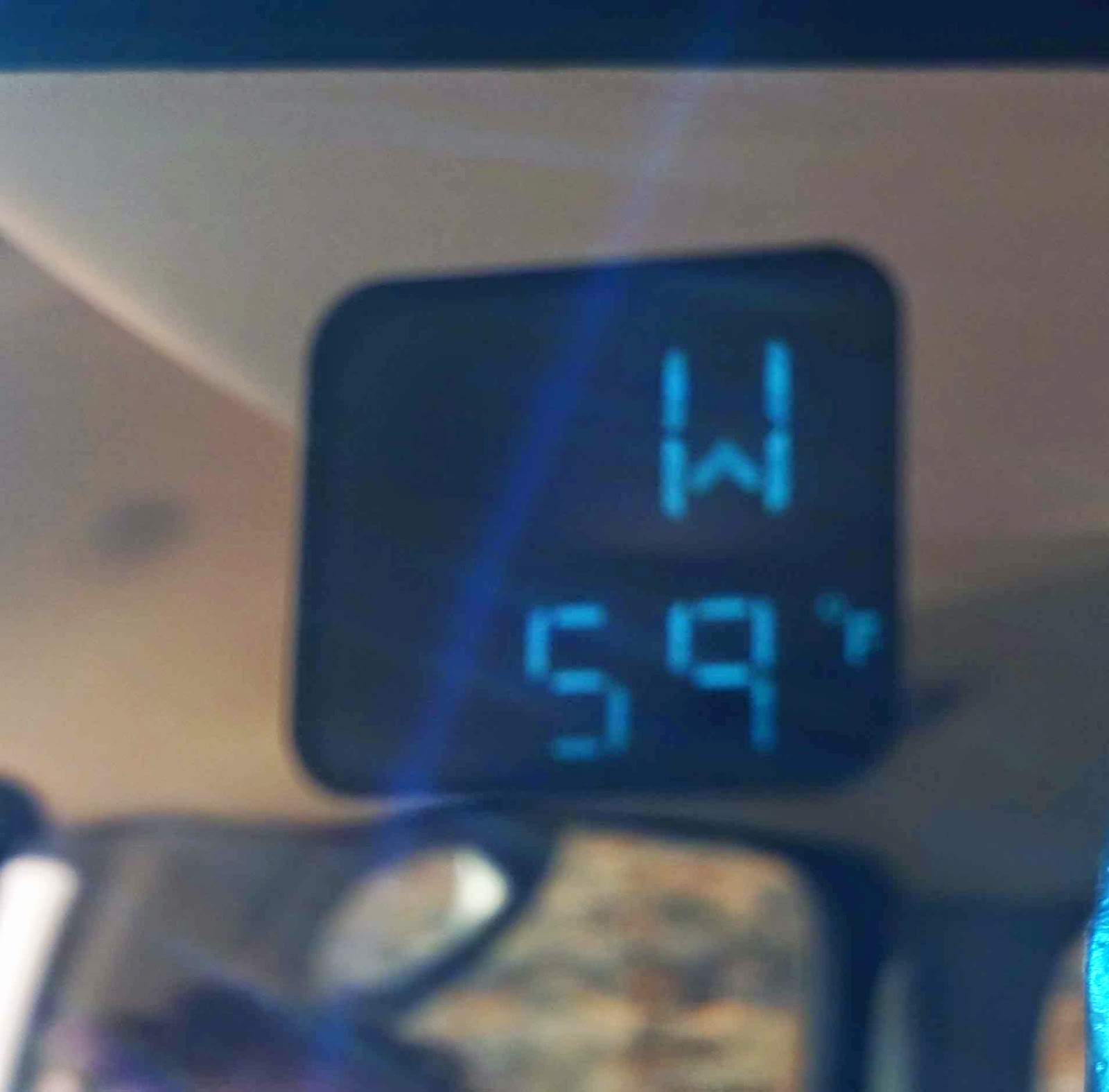 With Temps in the beginning of February hovering into the 60's, it was perfect to get out and visit a canyon and even work up a little bit of a sweat doing so.  I have been wanting to get back into the main fork of Hog Canyon for quite some time now.  It has been many years since I have been through there, and dragging an unsuspecting 3rd party through it would give me a sense of awesomeness knowing they were going to question my sanity.

Brett and I packed up early leaving town just about 8:30 ish.  We arrived at the trail head and parked just before 10:30 ish.  It's a real treat living so close to so many great canyon opportunities and being out in the Desert when it's not scorching allows you to enjoy the time out a little more.  We were pleased with low traffic on the road and pure solitude, although we did follow other foot tracks into and through the canyon, they had probably had the same idea as us the weekend prior. 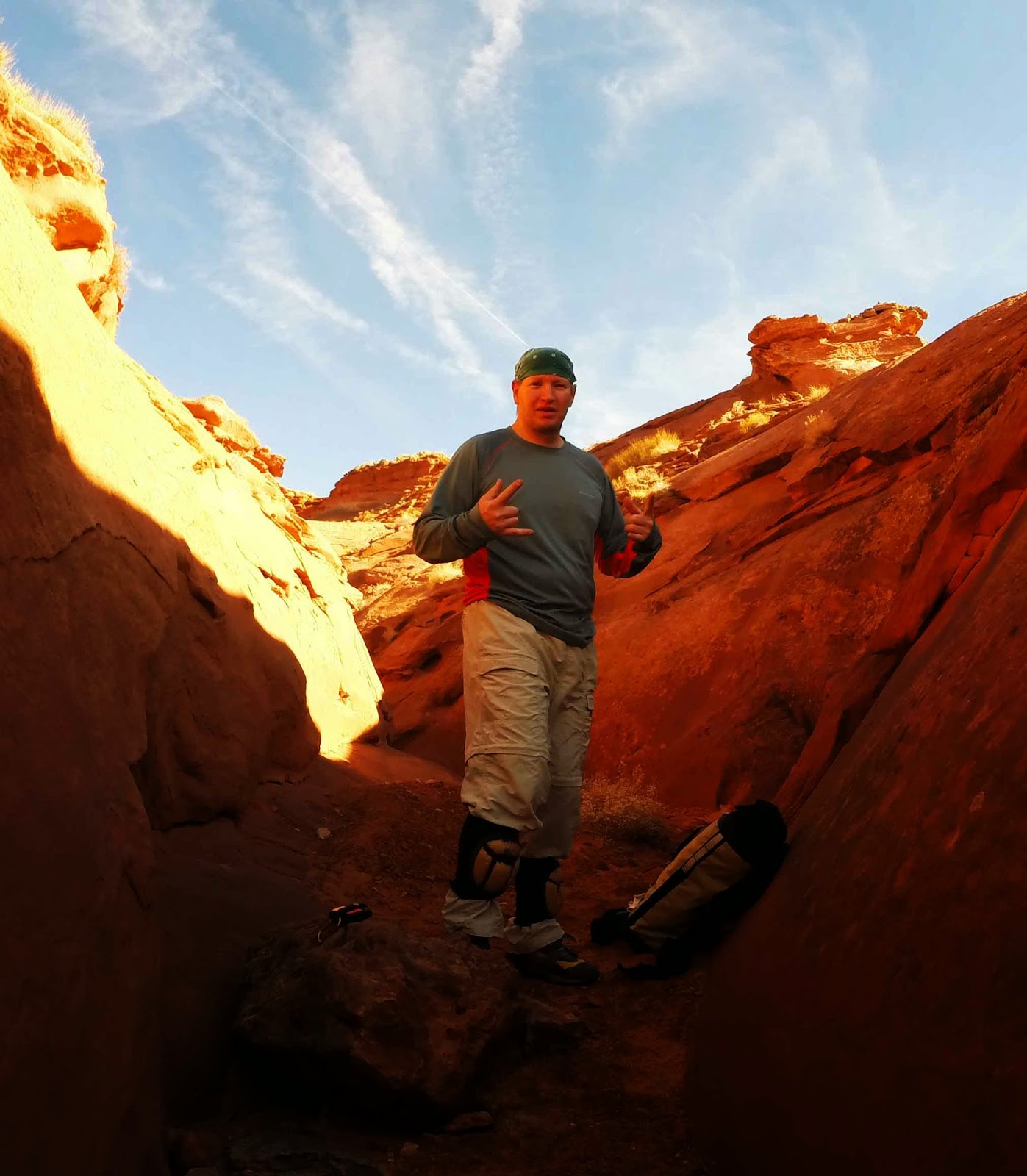 Brett and I packed as light as we could to move as quickly and efficiently as two people were able to.  Packed a lunch, some water, trimmed down our tech gear and emergency essentials to the bare est needs, grabbed a 100' 8mm Canyon Pro, some webbing and hit the trail running.  Well, at a fast walk.  We were both itching to get into the canyon.  The first trip of the year is always a special time to rejuvenate and explore and get our bodies back into the groove.  Well, by the end of this day, or groove needed some work still, but we were out heading to a canyon and it was glorious. 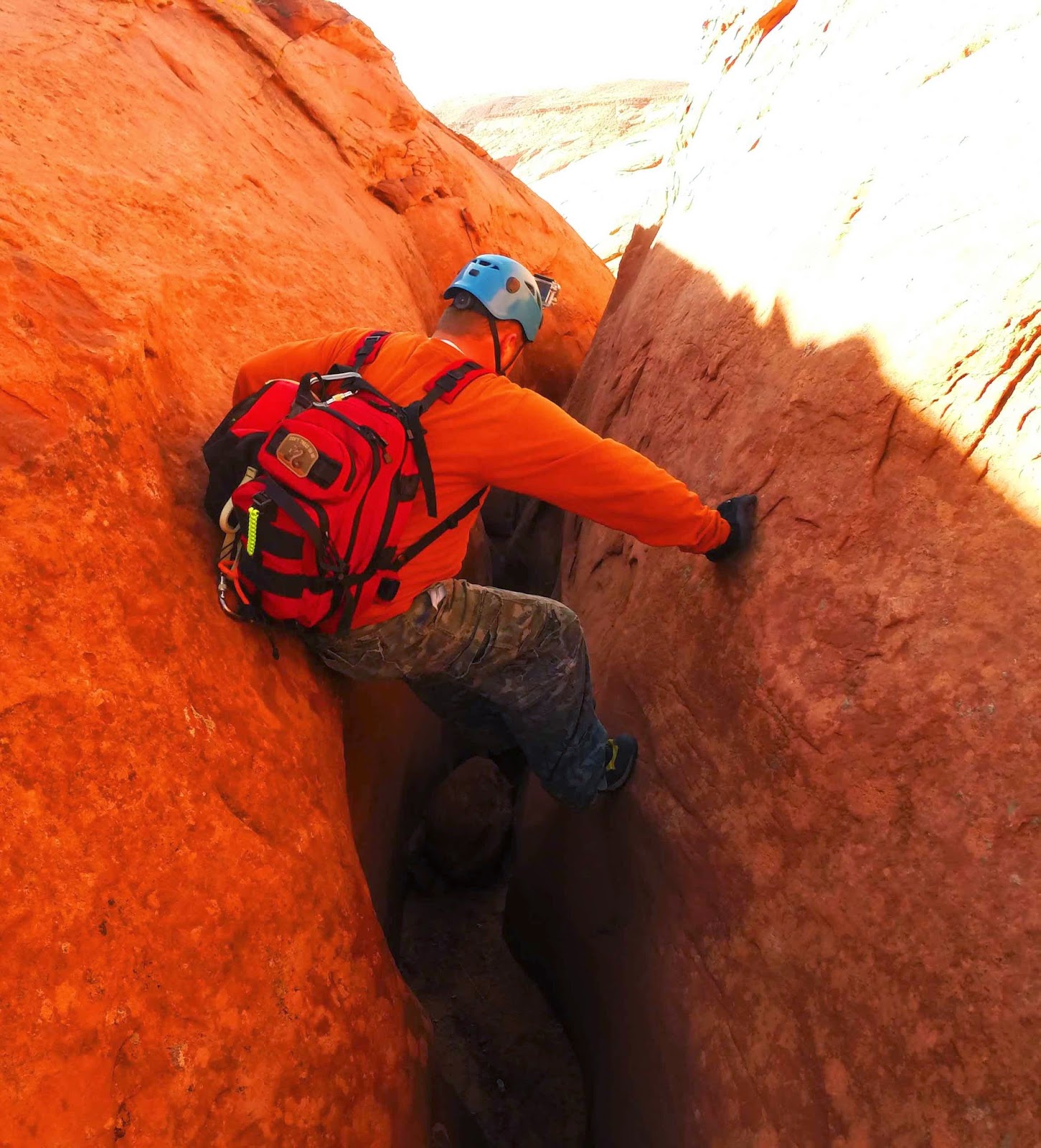 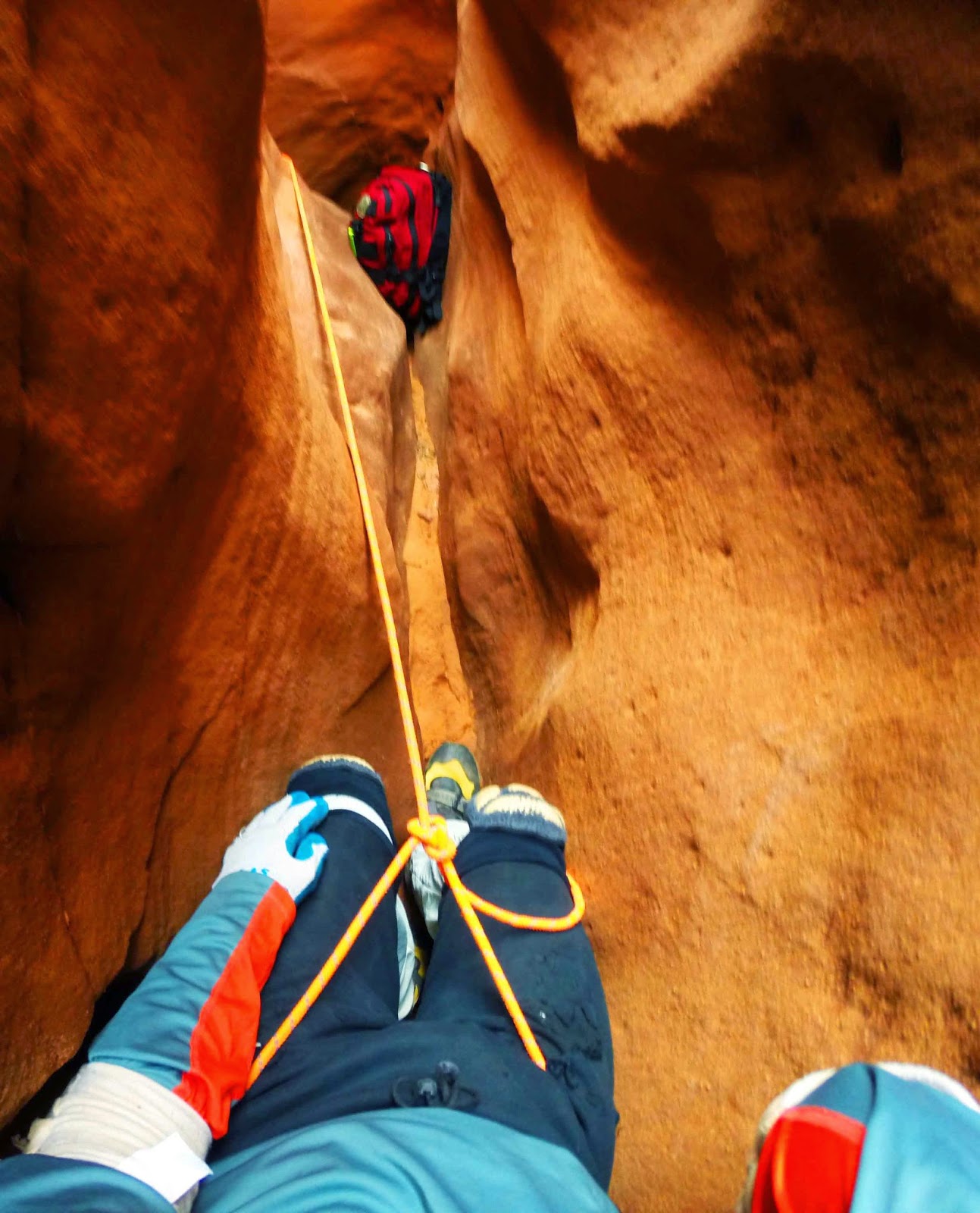 The desert did not disappoint.  As we approached the canyon the anticipation of being out was overwhelming.  We stopped several times to let the air sink in and fill our lungs with a relaxing vibe.  That relaxation didn't last long as the hard work soon began.  Hog 1, or Boss Hog as it is known, is not your friendly neighborhood canyon, it's a work horse.  With only two required rappels, the rest of the canyon is physical and up to you to man up and do it.  Brett soon realized he wasn't in for a walk in the park and started to question my sanity as was expected.  We heaved and hoed our way through the narrow corridors and found ourselves quickly to the first drop.  This was a questionable drop vs. down climb.  Brett opted to be on rope to check it out, afterwards I down climbed with a spot.  The next drop was immediate, and while the initial portion didn't require rope off the anchor, the second portion was about 10' straight walled.  We decided that this was the turn around spot, the final kiss it goodbye moment to do or die (is that too dramatic?) 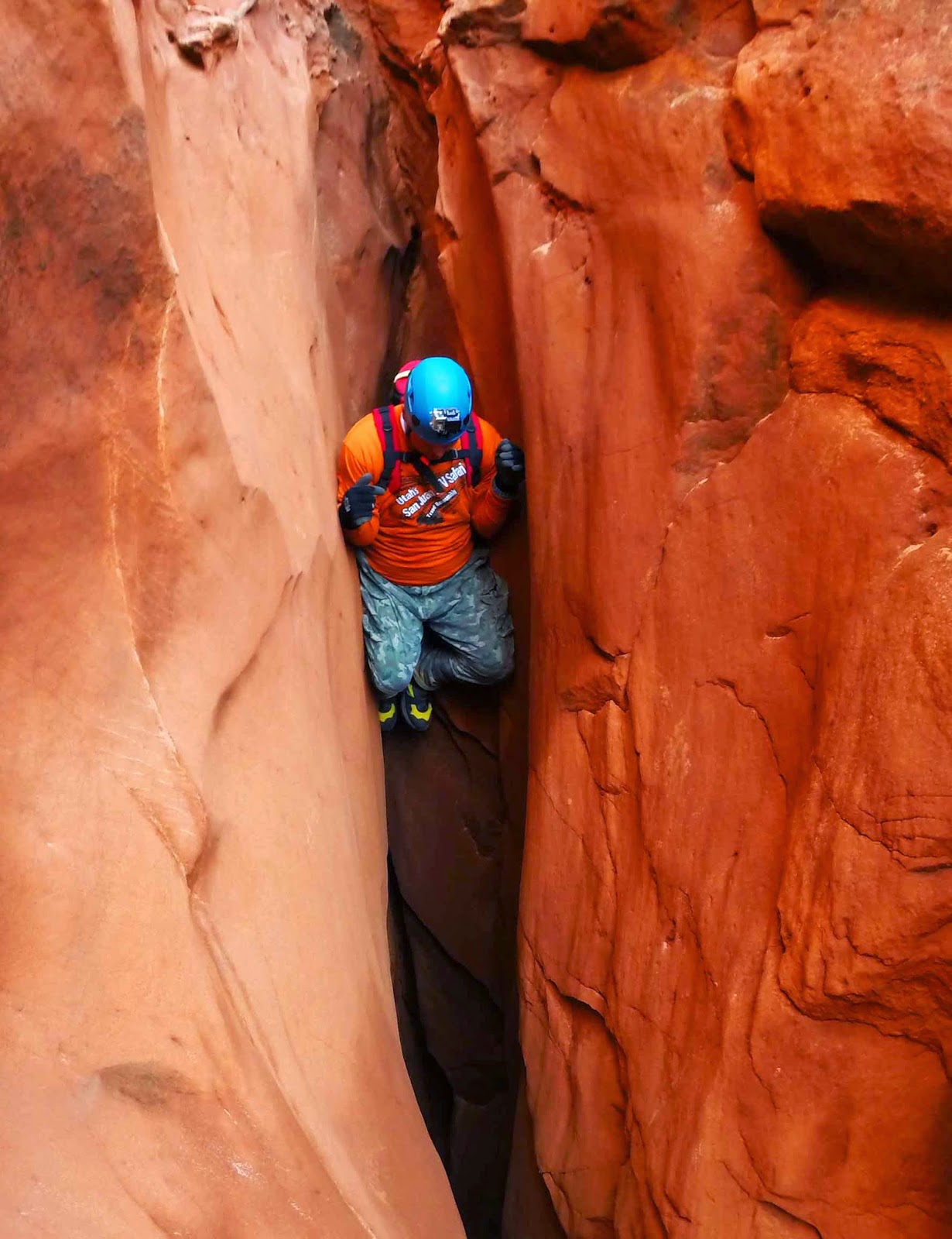 After dropping this point and moving on we had our work cut out for us.
This canyon was unforgiving and would be a bad place to be in poor weather, but man, the beauty of this place was spectacular.  The dark corridors and chambers we found or way in to was a magical place that I guarantee most normal sane people will never see outside of a mere photograph. 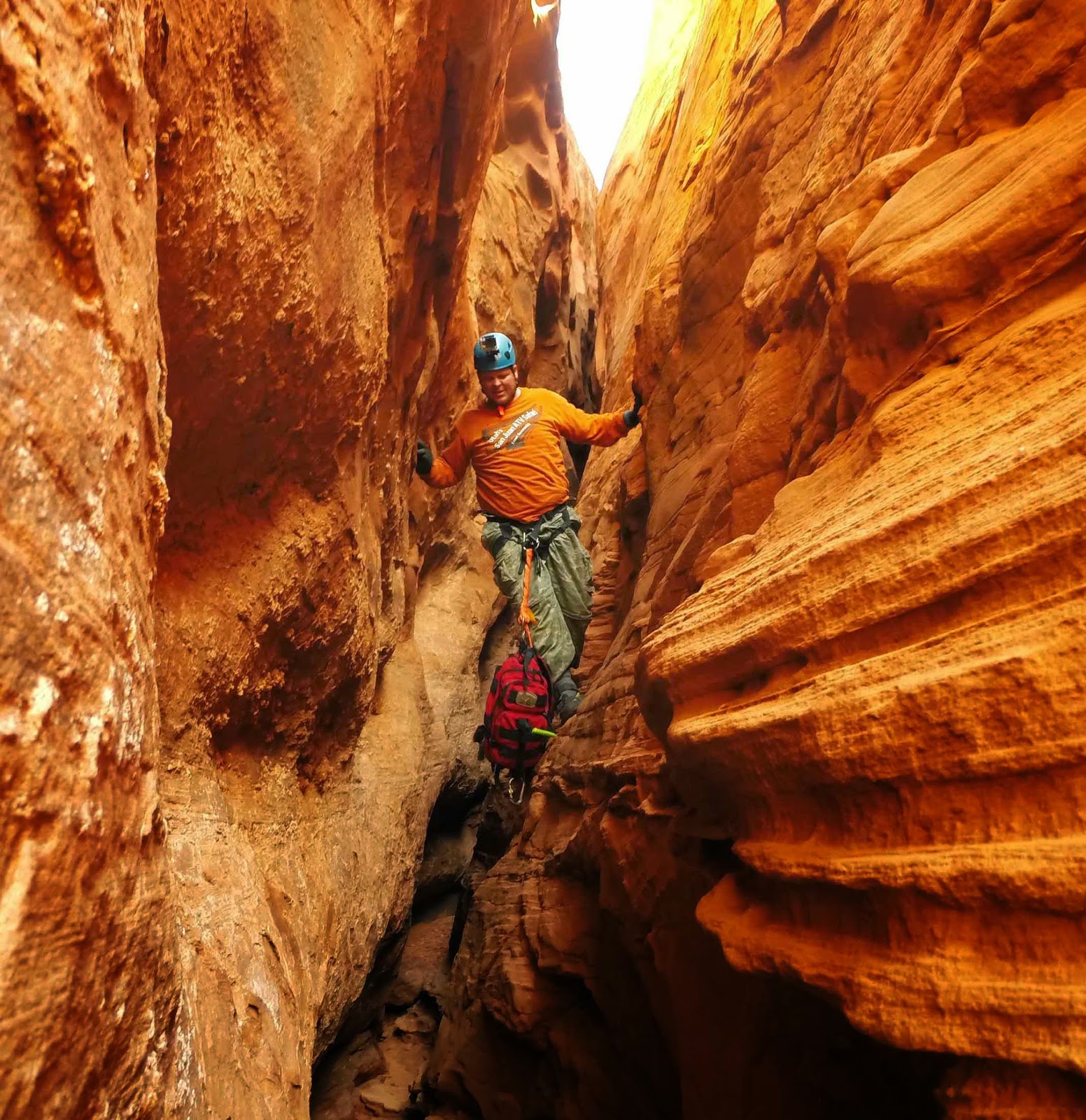 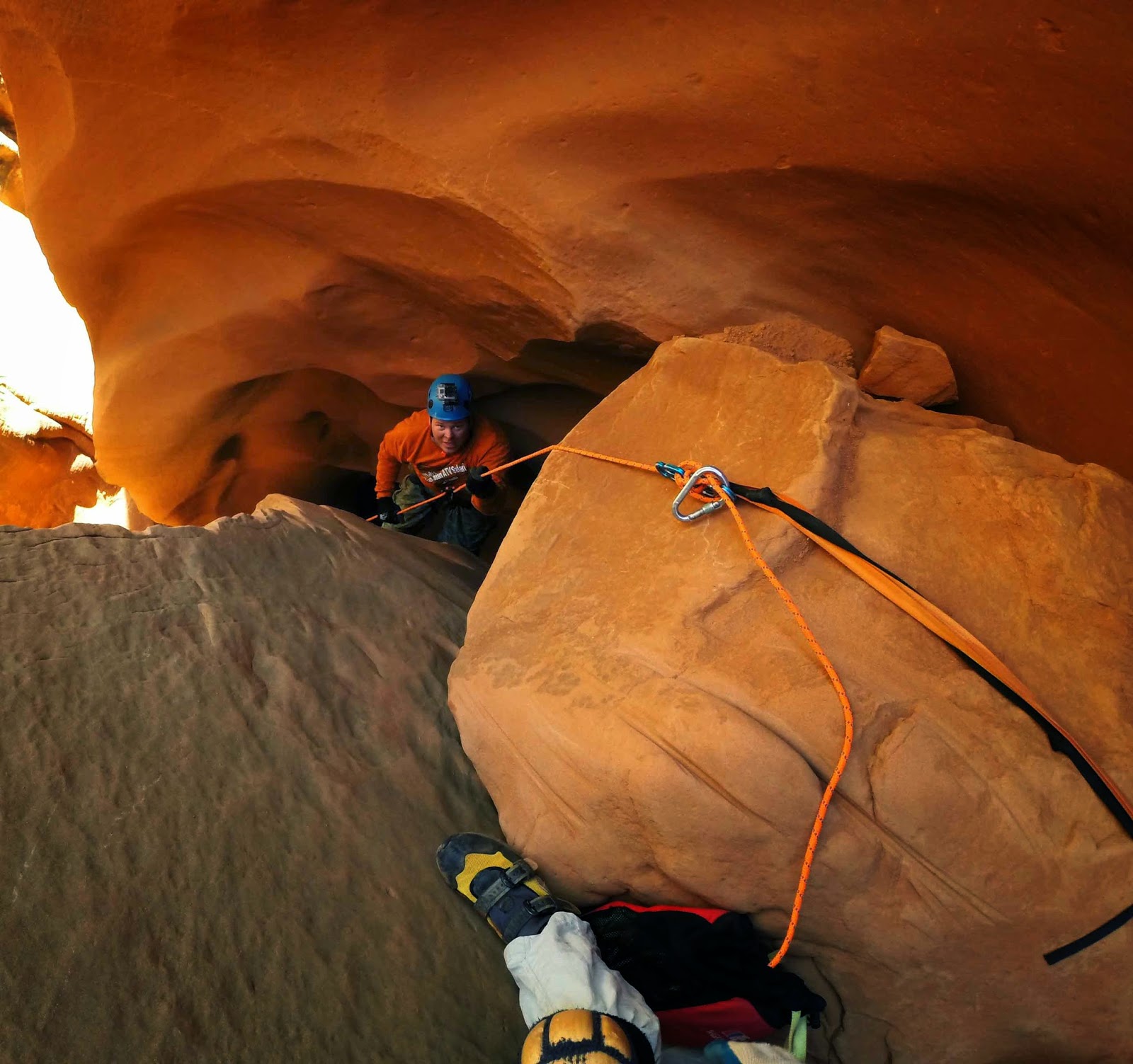 We pushed and prodded and continued on.  The final rappel came soon
enough.  Setting up an SRT Contingency was necessary as we could not see the bottom of the drop.  I threw out what I believed was at least 50' of rope and Brett jumped on.  As he rappelled he exclaimed that this was one of the most beautiful rappels he had done to date.  The sculpted fluting of the walls was special.  Brett hit the floor and we pulled up rope to proper length (I had dropped about 20' too much down).  After finishing the rappel we trudged on.  Knowing that most of the narrow stuff was done we wound our way in and out and through varying corridors.  At one point we found several patches of snow still in the canyon and commenced a snowball fight, something that doesn't happen too often. 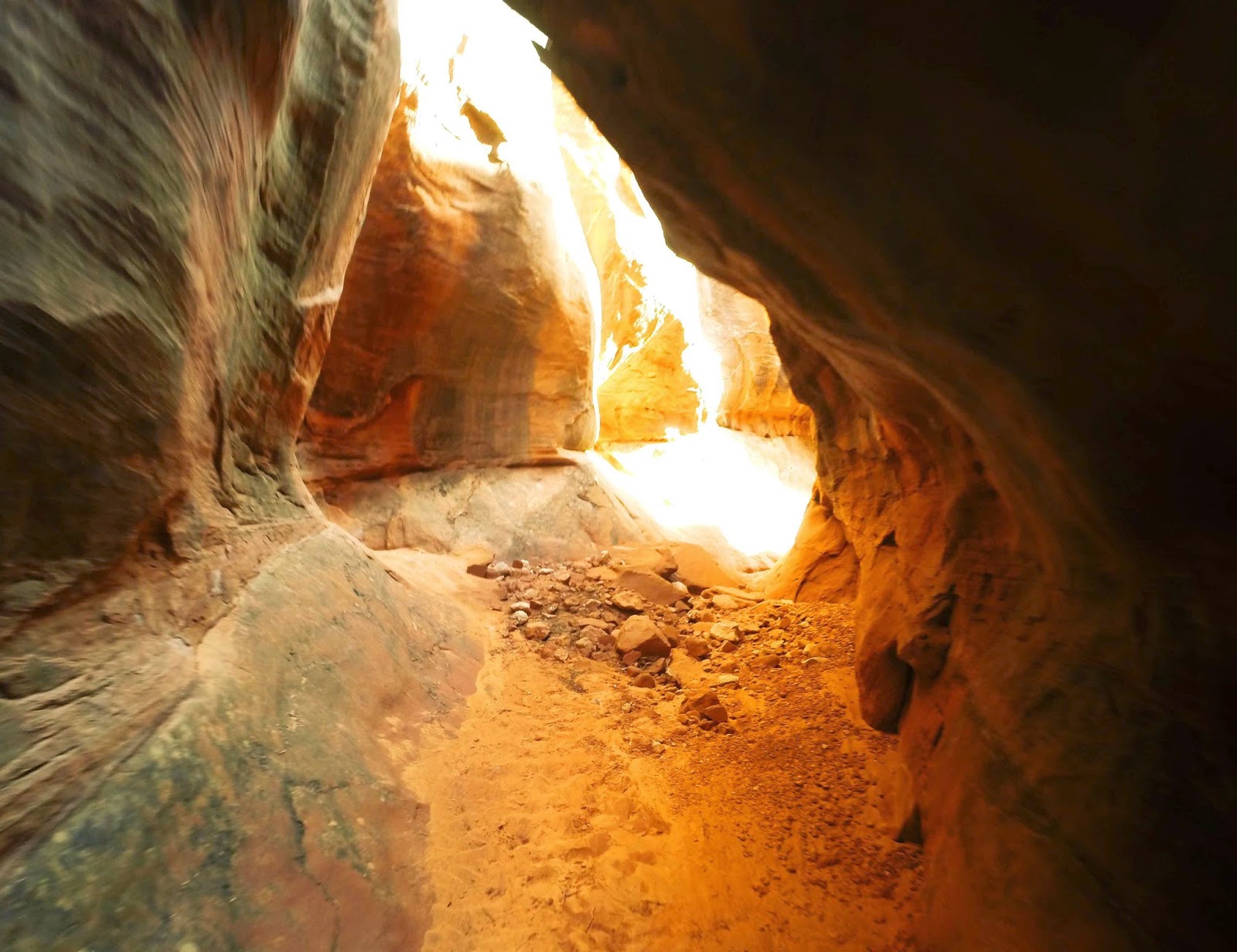 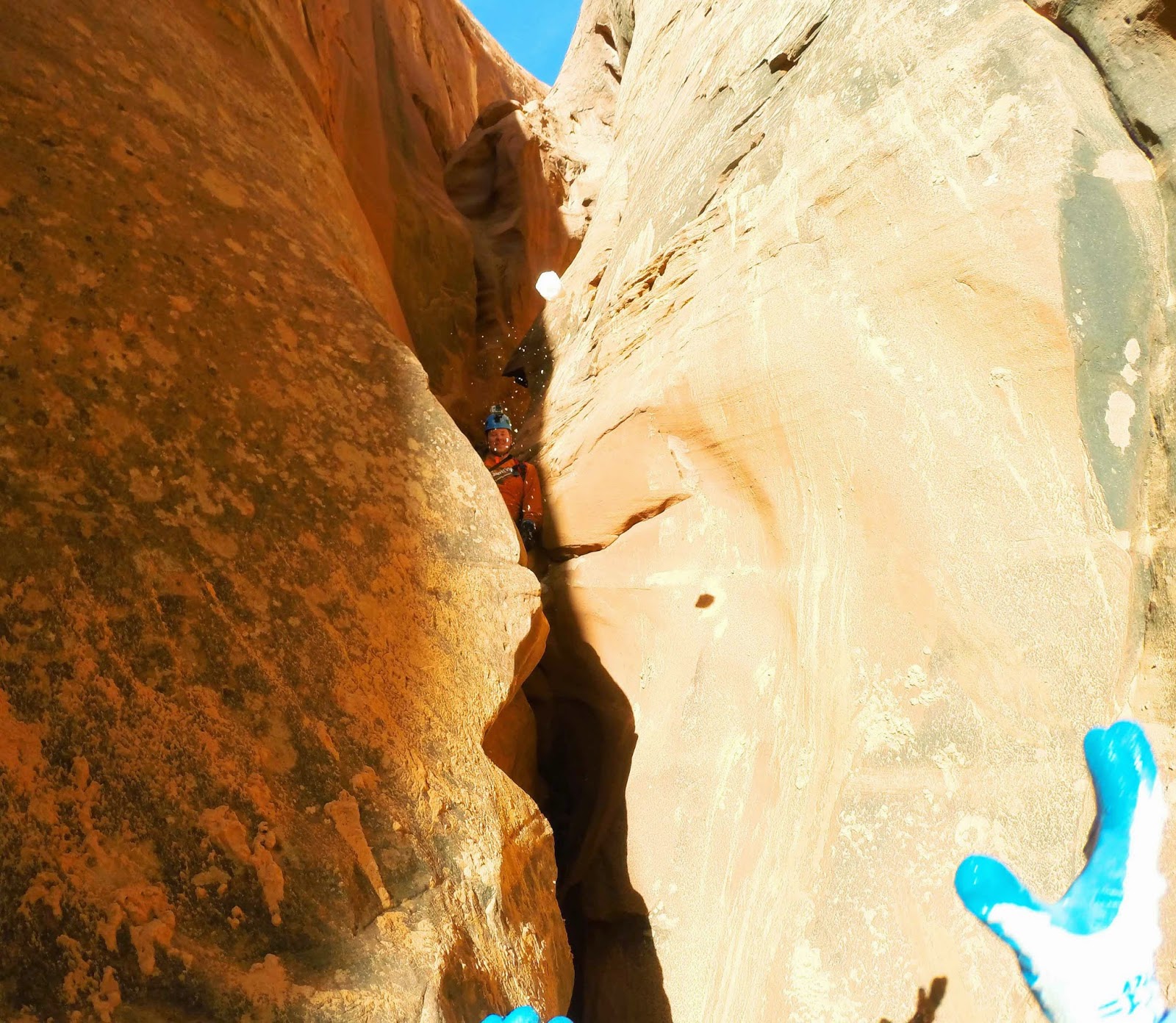 I knew we still had one more narrow slide to get through after the convergence of the canyon with Hog 4 (Merry Piglet).  The canyon was a true pleasure.  Brett was super stoked to have completed by far his most narrowest challenge to date and seen one of the best rappels yet.  The weather was fantastic and the bugs were even already out.  We traversed back up the ridge a bit where we settled down to eat some lunch and rest before the but kicking hike back out and to our vehicles.  The entire trip car to car took us about 4 hr 30 min including the 30 min lunch break.  The desert did not disappoint and we will certainly be looking forward to our next trip out. 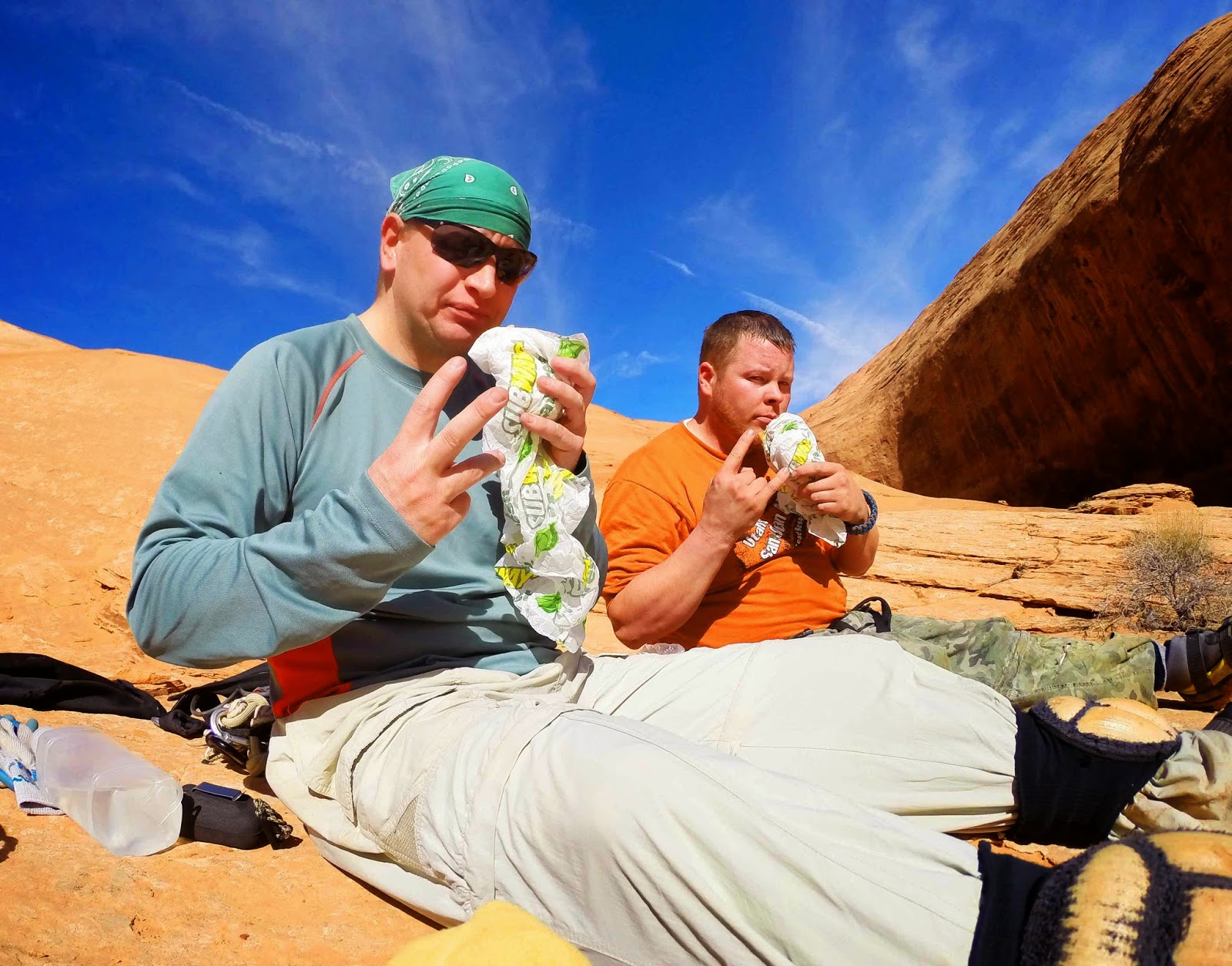 What are some of your first experiences and feelings each season when you get out for the first time?  How do they compare with adventures at the end of a season?  Share your comments. 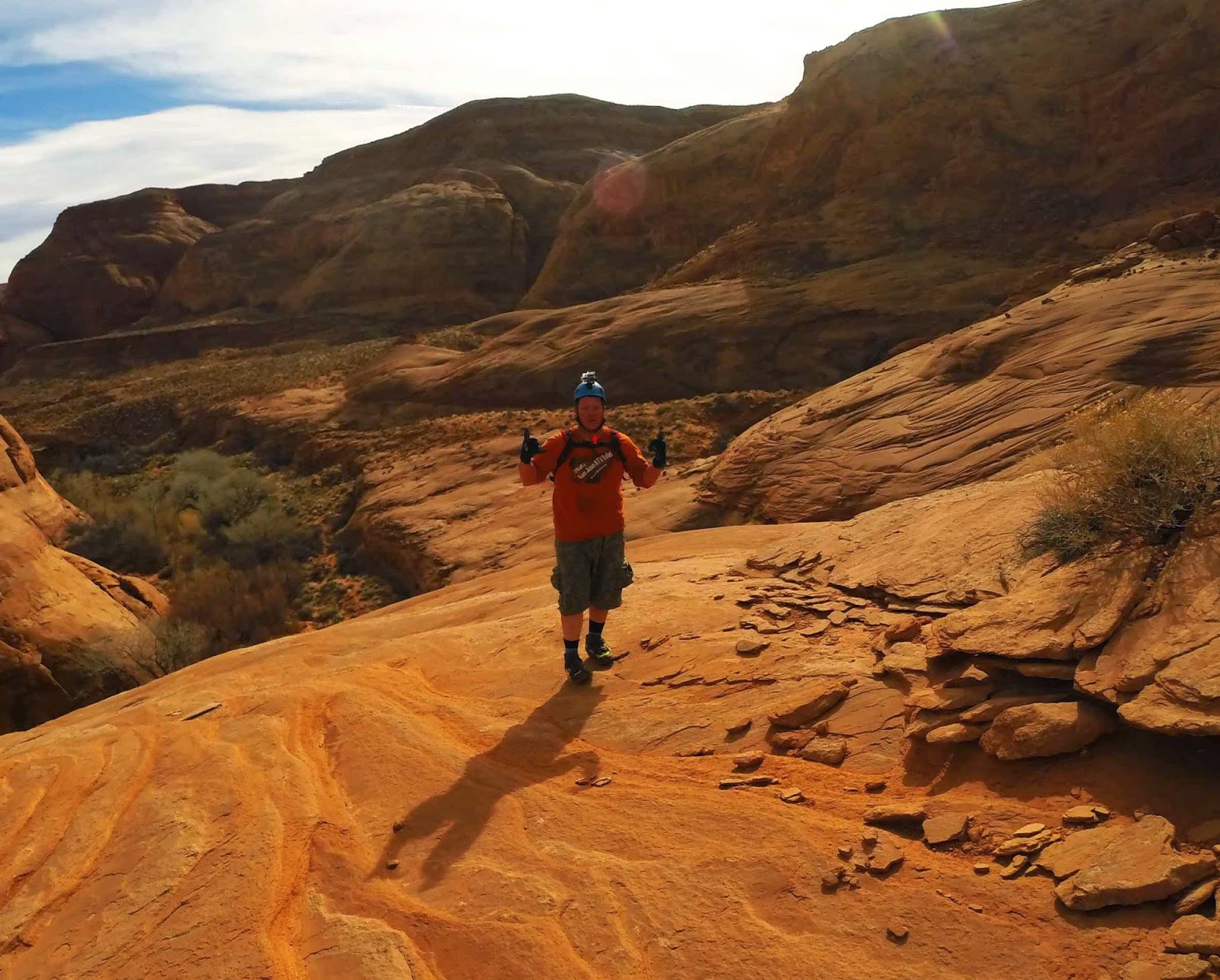 
Posted by Jared Hillhouse at 11:32 AM No comments: